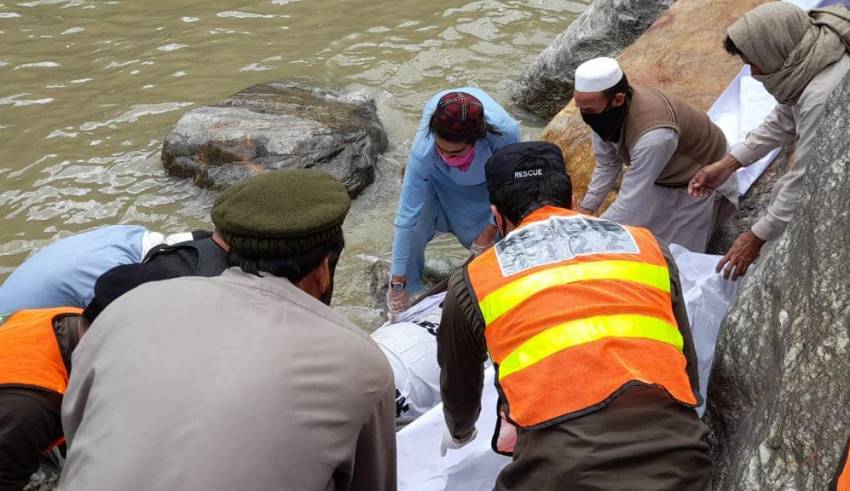 SHANGLA: A dead body found from the Indus river at Sarkool area of Chakesar tehsil here on Thursday, identified as Muhammad Hussain of Manshera who was drowned in the Indus river along his two children about a year ago.
The Rescue 1122 spokesperson, Muhammad Rasool told Dawn that following the information the rescue 1122 Bisham team reached the scene where dead body was found by local people.
He said the team recovered the body from the Indus river and then shifted to the district headquarters hospital in Battagram where it was identified as Muhammad Hussain of Mansehra district.
Muhammad Hussain of Manshera had come to Dandai Bisham for picnic and setting with his family at the bank of river when one of his sons drowned and his other son and he himself had also jumped into the river for saving the drowned one, however, his children were saved by locals but he his body was not found.
Meanwhile, at Bisham outskirts an eight year old boy died after hitting by a speedy pickup on the Karakoram highway.
According to locals, the boy Abuzar son of Zakir Yousafzai was crossing the KKH near his house when hit by the speedy pickup and he was shifted to the tehsil headquarters hospital, Bisham where doctor stated him dead.
The dead body of the boy was later handed over after medico legal procedures.
After the incident the locals demanded of the administration to construct speed breakers on the Karakoram highway because the road accidents were increasing on the international artery.
BUTCHER FINED: The assistant commissioner, Bisham Khuram Rehman Jadoon has imposed fine of Rs 10,000 on a butcher in Bisham city for fleecing the consumers as initiated crackdown against profiteers amid the holy month of Ramazan.
AC Bisham accompanied by his staff conducted raids in Bisham bazaar and after investigating a butcher who was fleecing the consumers for which he was imposed fine of Rs 10,000 on the occasion.
AC Bisham also warned all the traders of Bisham tehsil to avoid profiteering earlier the fasting month and during otherwise be ready for legal action.
End.