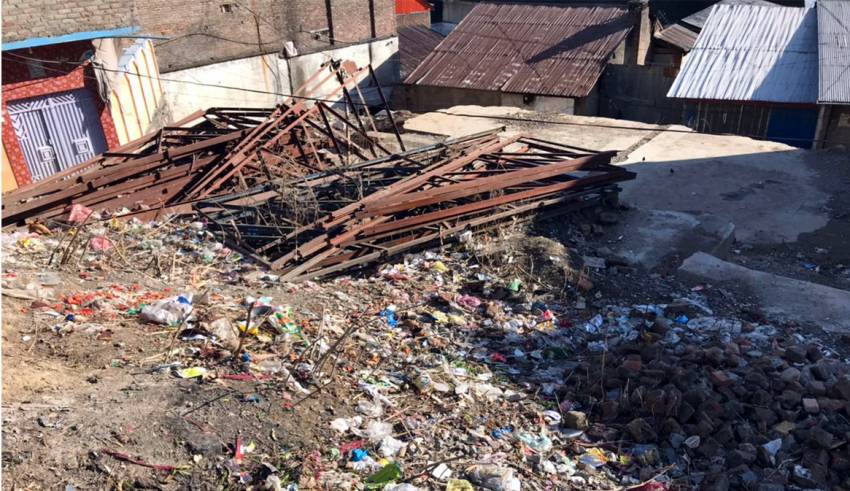 View of the GGHS Alpurai building site, It was demolished by Erra. Photo: Matiullah Sameer

SHANGLA: The government girls high school, Alpurai has been awaiting reconstruction of its building for over two decades which was demolished after it developed cracks in the results of 2005 devastating earthquake.
The government girls high school was among the girls schools of the district Shangla demolished by the Earthquake Reconstruction and Rehabilitation Authority (Erra) after 2005 earthquake but some of them are yet to be reconstructed and causing problems to the students.
Latif Khan, a local resident said the GGHS Alpurai was located just a few miles away from the district headquarters where including deputy commissioner, heads of all the departments seated but the area’s only school for girls was yet to be rebuilt.
He said that their children were facing severe problems due to absence of the school’s while the classes had been shifted to a rented building that was very congested.
Razia of class 9th told The Northern Post that she had been studying in this rented building since passing primary school classrooms were too small and congested.
“We are girls and can’t hold protests on the roads otherwise we would have staged one for our rights especially to demand early reconstruction of the school building,” she said and added that neither the government nor the education department was interested in school reconstruction.

Laila Khan of grade-10, said the environment in the rented building of school was not conducive to learning and she wanted the government rebuild their school immediately.
Saira bibi, a student of of grade-7, said they only heard tall claims of the elected representatives and officials about the reconstruction of their school but in fact even the ruble of the building had not been removed from the school site.
She said their classrooms were small and strength at the classes was more than the space of each room due to which even the covid-19 SOPs could not be followed.
Assistant district education officer planing and development at girls education department, Ikramullah when contacted in this regard, he said around 500 students were enrolled in the GGHS Alpurai and for its building he had submitted several letters to his high ups and construction and works department but owing the C&W negligence and not tendering timely the provincial planning and development department KP dropped it from reconstruction schemes.
He said that currently they had been paying Rs 40,000 monthly rent to the landlord of the school building since demolished its own building.
Replying a question, he said the government had also funds shortage issue, however, the school would be included in the upcoming annual development program.