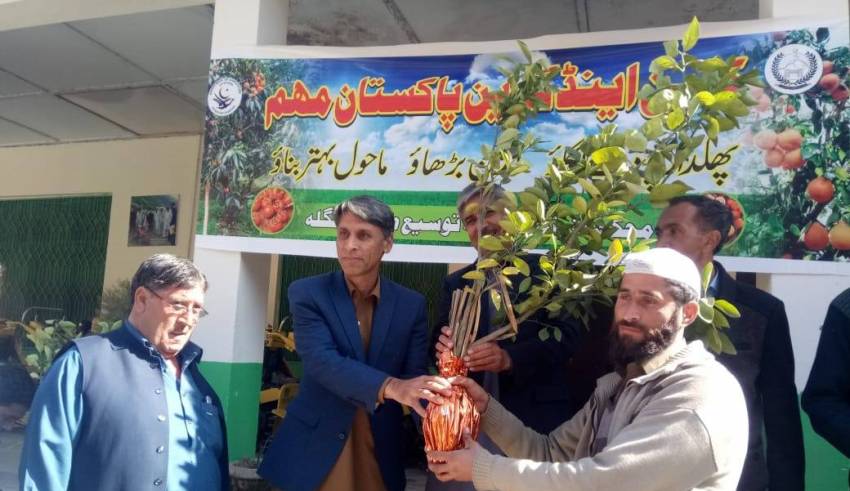 SHANGLA: The Shangla administration has launched prime minister agriculture emergency program for 2021 in Shangla here the other day, seeds and fruits saplings distributed among the local farmers.
The Prime minister agriculture emergency program 2021 launching ceremony was arranged at the district headquarters, Alpuri, where additional deputy commissioner, Shangla, Muhammad Sher was chief guest. The district Shangla director agriculture Jan Muhammad was also present on the occasion.
While addressing the inaugural ceremony, ADC Shangla urged the farmers to use your cultivated lands for agriculture and plant fruits saplings which would more benefit them than their expectations.
He said the federal and Khyber Pakhtunkhwa governments had a keen interest to help farmers in expanding local fruits productions.
The director agriculture, Shangla, Jan Muhammad, said on that occasion that under the primer minister agriculture emergency program they were supporting the local farmers of the Shangla.
“We have two projects under the prime minister agriculture emergency program “Wheat productivity enhancement Project Khyber Pakhtunkhwa” in which we would provide 2350 wheat seeds bags with Rs 1200 subsidy on per bag,” He told.
Director added that in Fertilizer distribution they would distribute Potash and Phosphatic with 50 percent subsidy for 76 acre land across the district.
He said Weedicide would also be distributed for 1600 acres with Rs 900 per acre subsidy.
He said they also offer subsidy for local farmers and establish orchards for them with the district funds.
The director said Shangla was rich and has potential for establishment of fruits orchards as it had already been increased production of different species fruits.
They also distributed fruits saplings among the local farmers on the occasion under the Plant for Pakistan campaign.
Meanwhile, The deputy commissioner, Shangla, Hamid Ur Rehman inaugurated Plant for Pakistan campaign by planting saplings at government degree college, Alpuri.
The inaugural ceremony of Plant for Pakistan was held at Degree College Alpuri, where DC Shangla, Hamid Ur Rehman was chief guest. Divisional Forest Officer, Shangla, district health officer, Shangla and officials of the other line departments were present on the occasion.
DC Shangla said on the occasion that 3.7 million saplings of the different species to be planted under this campaign all over the district.
He directed all the heads of the line departments to ensure plantation in the respective areas and departments and every government employee at least plant sapling in the drive.
Saplings were also planted by the officials present on the occasion at the degree college, Alpuri.