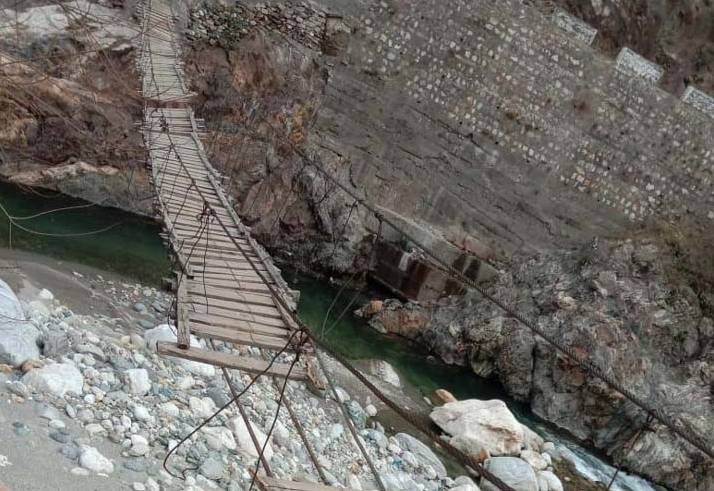 SHANGLA: The wooden planks of a pedestrian suspension near Bisham city at Domial area blown away due to strong winds blowing in the area consecutively for the last two weeks which had also blown away signboards and other structures.
A pedestrian wooden bridge connecting Domial village with the rest of the district at Bisham-Swat road which was also in a dilapidated condition blown away by the strong gale disconnecting the village from the rest of the area and forcing the area people to cross the Khan Khwar river by walking which is also a threat for the locals.
Muhamamad Irfan, Shahid Ali, Sahib Zada, and other locals told reporters on Monday that their only source for crossing the Khan Khwar river to reach their homes was the pedestrian bridge but it was completely damages and most of its planks blown away by strong winds.
They said the school-going children were not going to school since the bridge damaged because the rehabilitation of the bridge on self-help basis was not possible this time.
“We demand of the district administration, Shangla to repair the suspension bridge as soon as possible so that their difficulties overcome. We don’t have an alternative route to cross the river and men of the area daily go to the Bisham bazar for work and return and the bridge rehabilitation is essential should be done on emergency basis,” Sahid Zada, said, who is a security guard at private bank in Bisham.
Meanwhile, the tehsil municipal officer, TMA Bisham, Mazhar Muzaffar Awan along the engineering staff visited the broken bridge and estimated its rehabilitation cost and, said the bridge would be rebuild soon.
WILDFIRE: The forest compartments at Yakhtangay area of Shangla have been gripped under the wildfire which spread to surrounding compartments.
According to the locals the wildfire erupted due to unknown reason continued for third consecutive day which spread in the forests of scenic valley Yakhtangay, however, the forest department guards are trying to control the blaze.