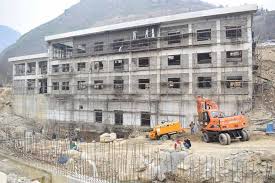 SHANGLA: The local residents of Shangla have demanded of the government to ensure the rights of local people in the 11.80 Megawatt Karora Hydro Power project which is near to opening in the next few months.
The local elders of the district Shangla, particularly of Kana and Alpuri tehsils, have announced a grand jirga on January, 25 for seeking rights from the government in the under-construction 11.80 Karora hydro-power project including jobs, royalty, and electricity to the local community on discount prices.
The local elders Gulab Shahpuri, Asghar Khan, Sarfraz Khan, Doctor Abid, Mian Sohrab and others from the different tehsils of Shangla, told reporters on Sunday that they called a grand meeting to be held on January, 25 at Karora regarding the agenda of demanding rights in the under-construction 11.80 Megawatt Karora HPP being built at Karora area in tehsil Alpuri.
Gulab Shahpuri, an elder said that the deputy commissioner had signed an agreement with the local residents in 2017 that electricity would be given to the local community on discount rates and jobs provided to the local people but now they wanted implementation of the agreement as the project is 95 percent completed.
He said the local people of the different union councils of Kana and Alpuri had been suffered badly due to the execution of72 Megawatt Khan Khwar Hydro Power Project and also the under construction Karora hydropower project because they rendered their lands and deprived from the water too.

Asghar Khan said that they wanted jobs for locals on priority, electricity from the project on discount rates because a number of degree holders youth in the district were unemployed and the region majority population was comprising on poor community.
ACCIDENT: A man was killed and another injured when petrol carrying oil tanker fell into a stream near PTDC check post in Bisham tehsil here on Sunday.
Rescue 1122 official said that a Gilgit-bound oil tanker fell into the stream while negotiating a sharp turn near PTDC check post in which two people the driver and his helper were onboard.
He said the Rescue 1122 reached the scene and retrieved both in which a man identified as Aurangzeb, of Chilas died and Muhammad Pervez injured, however, the rescue 1122 team shifted the injured to Tehsil Headquarters Hospital, Bisham while provision him with first aid inside the ambulance.