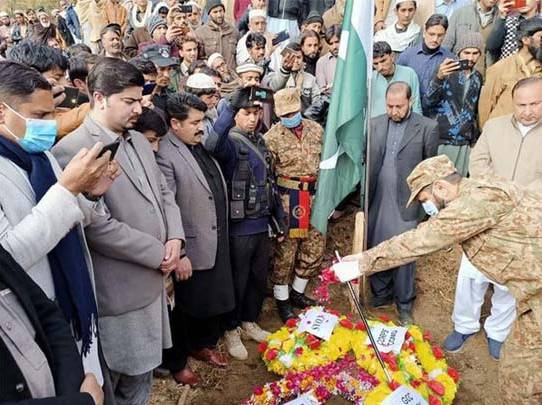 SHANGLA: A Frontier core constable who had embraced martyrdom at Mohmand district along the Pak-Afghan border the other day, laid to rest with military honour at his ancestral graveyard at Towa, Sondhvi in Puran tehsil in Shangla.
The Pakistan Army soldier Fazal Wahid body was brought to his native town Towa in a rally of cars on Thursday evening and later his funeral prayers also offered at his village which attended by army officers, jawans, local MPA from PK-24 Faisal Zeb Khan, political leaders and other people from the different walks of life.
Fazal Wahid had been serving in the Pakistan Army for the last seven years and currently deployed along the Pak-Afghan border in Mohmand district.
He had embraced martyrdom in the terrorist attack the other day.
Leaders of political parties present on occasion said the tremendous sacrifice rendered by the army soldier was an honour and a matter of pride not only for his family but also for the entire district.
ACCIDENT: Four people were injured when a pickup fell into a ravine due to a frozen slippery road at Machar area in Alpuri on Thursday.
Rescue 1122 spokesman, Rasool Khan Sharif, said that a Suzuki pickup was on its way to Alpuri from Swat when it fell into a ravine due to slippery frozen road as a result including the driver four people were injured.
He said the wounded persons were retrieved from the ravine by the rescue workers and after provision first aid at the spot, they were shifted to the district headquarters hospital, Alpuri. a