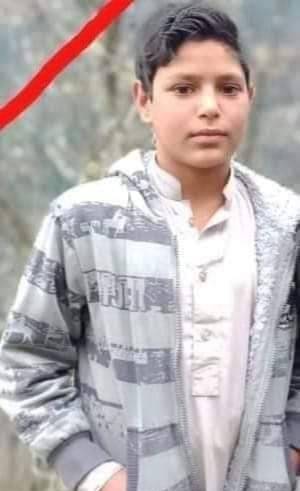 SHANGLA: A 12-year-old boy’s stabbed dead body found near his house at Kapro Banjar Sar area of Alpuri tehsil here on Monday, after stabbing the boy with a knife by an unknown suspect had pushed him from the cliff which led him to death.
The station house officer, SHO, Alpuri, Muhammad Arif Khan, told this correspondent that a mother of the slain minor Afid Hussain, Saliheen stated in the first information report, registered at the PS Alpuri that she was busy in some domestic work when heard some noise of boys and when went outside to see two boys fighting outside and asked them to calm down and returned back to work inside the home.
“I did not know that one of the boys fighting was her own son,” she said, adding she was sure that her son was killed by Shahid Ali, their neighbour.” She claimed in the FIR.
She said in the FIR that they had not any personal enmity with anyone and his son was a student of grad 8th and she wanted justice for slain boy.
SHO Muhammad Arif, said after receiving the information about the murder, he rushed the scene and shifted the dead body to the district headquarters hospital, Alpuri for autopsy and after fulfilling the medico-legal procedure the dead body handed over to the family.
He said the autopsy report suggested that the boy was first stabbed with knife and then pushed from the cliff which caused his death.
SHO said the FIR had been registered in the case under section 302 and the nominated accused Shahid Ali-17 who was neighbour of the slain boy arrested and police investigation team begun further interrogation.
CONSTABLE SUSPENDED: The district police officer, Shangla, Rahim Shah had suspended a police constable for being involved in walnut-tree bark smuggling.
A statement issued by the DPO Rahim Shah on Monday said that a constable Attaullah who was deployed at police station Bisham was arrested by the Torghar police and forest department by seizing walnut-tree bark from their possession.
It said the police constable Attaullah was allegedly involved in the smuggling on that grounds he had been suspended and inquiry launched to probe the matter.